Sometimes You Win Even Though You Didn’t Get to Victory Lane!

“We didn’t get to Victory Lane, but Nashville was a winning race for us,” driver Brad Smith said when asked about his team’s efforts this past weekend at Fairgrounds Nashville Speedway. “We unloaded a new race car at Nashville and had the expected ‘new car’ issues. Didn’t have time to take the car to an informal test session, so it was ‘learn as you go’ this weekend. This will be a good car.” When asked how he knew that, the Shelby Township, MI driver smiled and said, “because I have James Hylton’s 60 years of experience in my corner.”

When pushed to explain why Nashville was a “winning race” despite finishing 21st, Smith said, “this was our team’s first event at an ARCA race with Big Brothers Big Sisters (BBBS) and it was a huge success in spite of a number of unexpected hurdles. We just put this venture together days before the race. We didn’t have a large tent, or other reference point to meet. Everyone showed up prior to the race without much direction. My friend, Rowdy Maglite, graciously served as host while I was off pushing the car through inspection, doing drivers meetings, etc.. Then I had guests that were coming to the race unexpectedly due to vacation travel issues and the timing of their arrival was right when I was trying to get across the track to work with BBBS. With the help of a lot of friends at the track, we were able to have a quality event for the kids. This is what the racing community does so well……………….help each other out!!”

Special thanks to the following individuals who helped organize the event:
• Rowdy Maglite – and his radio crew for helping plan, coordinate, and host the event
• Bob Sargent & Adam Mackie – from Track Enterprises that allowed the event, provided complimentary tickets & event programs to the organization, and provided track resources to help planning
• Ron Drager & Tom Legeman – from ARCA that gave us initial advice on event scope and planning
• John Robinson – from General Tire that offered participants souvenir baseball caps
• GM CAR (Community Action Resources)
• James Greer from the Nashville chapter of BBBS- for their appreciation and having a great time!!

“We’re planning on doing 5 more of these events at ARCA races with BBBS in 2017. We will build up from the success of this initial event. I had a great time working to organize this. This was all about introducing some 6th & 7th-grade kids to the world of stock car racing. We accomplished our mission. Nashville was a winner”, said Smith. 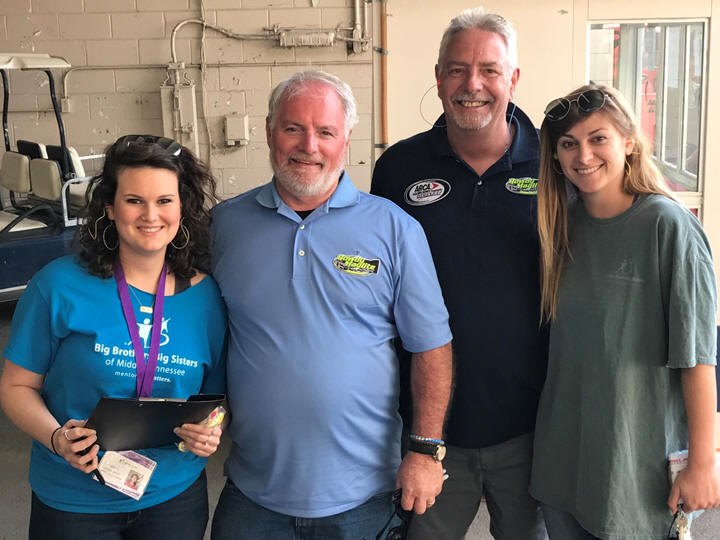 Our team mates and sponsors:
About Brad Smith: Brad is closing in on his milestone 300th career ARCA start and has been a consistent top-20 driver throughout his career. In 2016 he finished 6th in ARCA Driver Points and also won the inaugural ARCA General Tire “Spirit Award”. He also was the winner of the ARCA “Sportsman of the Year” award in 2006.

About GM CAR (Community Action Resources):
Doing what’s right.
At GM, it is our values, ethics and actions that define our approach to doing business.
While our largest and perhaps most direct community impact results from decisions about plant locations, employment levels and suppliers, we work hard to address the health and vitality of our communities through financial and in-kind contributions and educational and community partnerships.

Giving back.
The General Motors Foundation (GMF) was created in 1976 to ensure continuity of corporate philanthropic efforts. The GMF is committed to supporting organizations and programs designed to improve the quality of life in communities. The GMF supports a variety of activities in four major areas: education, health and human services, environment and energy, and community development.