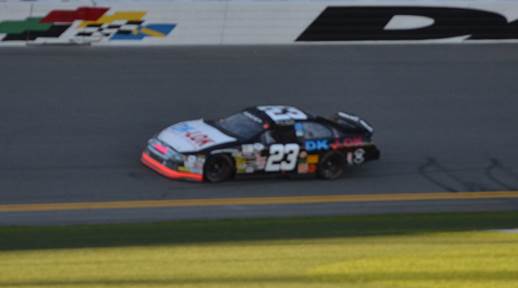 On May 1st, 2015 Brad Smith climbed into his James Hylton Radon.com Ford at Talladega Superspeedway expecting a solid day in a car that had proven it had speed in practice and qualifying. Ten months later, multiple surgeries, skin graphs and hours of physical therapy that followed that horrific crash at Talladega, Brad Smith would climb back in to a race car attempting to make the biggest race of the year.

“I’ve had my share of beat up body parts but nothing compares to what happened at Talladega. I’ve always felt good in my mind about climbing back in the window but this time I was still limping and I had some questions I needed to answer”, offered Smith.

As luck would have it Max Force Racing was looking for a driver for their second car at Daytona, Hylton graciously loaned Praytor Smith for the weekend and the ARCA veteran was back behind the wheel.

“The first issue we had was me fitting in Thomas’s seat. We used to swap seats a couple of years ago and I think all this laying around the house has added a little to my frame”.

With driver snuggly in seat the #23 DK-LOK Ford made it’s way out to practice. Smith never missed a beat behind the wheel and was a smooth as he was 10 months ago.

“It felt good to get behind the wheel again, whatever worries I had were gone within a few laps and the team started working on our DK-LOK Ford.”

Unlike the teams other car the 23 was making its first trip to Daytona and had not had the benefit of testing. Smith’s 20 plus years of experience behind the wheel was now working on gaining speed and trying to make the race.

“We put this deal together in less than a week and we really weren’t able to give Brad much to work with,” said team owner, Tommy Praytor. “We were glad we had a driver with so much experience he gave us great feedback.”

The team searched for speed in both practice sessions and Smith was able to get the DK-LOK Ford in the field rolling off 31st. Ultimately, the gremlins the team were fighting in practice found their way back during the race and Smiths return was over sooner than expected.

“It was great to be back behind the wheel again, I appreciate the Praytor’s giving me the opportunity. Wish we had been able to race a little harder and longer but these things happen. It’s amazing the healing power of a race car at Daytona. My legs and feet felt really good in the car and I’m looking forward to Nashville.”

After moonlighting in Daytona, Smith will return to Hylton Motorsports for the remainder of the 2016 season.

About Max Force Racing LLC: A single car on an open trailer with a four-drawer toolbox was the humble beginning of what has become a staple of racing on the Gulf Coast for almost 20 years. From its modest beginnings, Max Force Racing has garnered a State Championship, Track Championship, three US Army Rookie of the Year titles, and over 70 wins. With Thomas “Moose” Praytor handling most of the driving duties, Max Force Racing will field two full time entries in the ARCA Racing Series presented by Menards. Max Force Racing has rumbled to the top 10 of the Championship Standings the last three years including being awarded the HG Adcox Sportsmanship Award. For more information on the DK-LOK team check out www.maxforceracing.com.