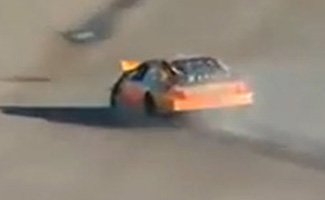 Brad Smith continued to rest and recover in an Alabama hospital Monday as he recuperated from injuries sustained in a crash in the ARCA Racing Series presented by Menards race Friday at Talladega Superspeedway.

“I’m banged up and sore but overall, I’m going to be OK,” Smith said Sunday from the hospital.

Smith, a 46-year-old veteran racer from Shelby Township, was running in the lead draft when he could not avoid impacting the spinning car of Austin Wayne Self on the 2.66-mile Talladega Superspeedway tri-oval. Smith exited the car following the incident, alert and conscious. He was treated at the infield care center and later transported to University of Alabama Birmingham Medical Center following the accident.

He injured both ankles and underwent surgery following the race.

“There is tendon and ligament damage to my left ankle, and although it’s not actually broken, there’s a possibility the doctors will do a skin graft on it due to the nature of the injury,” Smith said. “My right ankle injury is not as bad, but I do have a fracture there. Beyond that, there have been lots of tests and monitoring. We’re discussing when we can finish up any further procedures here so I can be released to doctors at home in Michigan.”

Smith’s sister, Debra Dunn, is with him in Birmingham.

Smith, who drives for Hylton Motorsports, is 10th in the driver point standings after five races. He has made 259 ARCA Racing Series starts, dating back to 1988. The accident occurred on lap 53 of Friday’s International Motorsports Hall of Fame 200 that was won by Blake Jones.